Two hundred air cadets and veterans from across the North East paraded against the magnificent backdrop of Durham Cathedral to remember the bravery, sacrifice, and ultimate triumph of the men Winston Churchill dubbed ‘The Few.’

It is 76 years since the Battle of Britain raged in the skies above England as the RAF fought to gain air supremacy against Hitler’s Luftwaffe and bring to an end the Fuhrer’s invasion plans. And yesterday the veterans and Air Training Corps cadets from across Northumberland, Tyne and Wear, and County Durham, formed up on Palace Green before marching into the cathedral for a special service of commemoration. Spectators turned out in their droves to show their support and remember the 544 British and overseas air crew who died defending our nation between July 10 and October 31, 1940 – the period known as the Battle of Britain.

The annual commemoration is always held on the Sunday closest to September 15; the date Hitler is said to have realised he had lost the aerial battle for supremacy of the skies. It was on that day that the Luftwaffe sent 1500 aircraft to rain bombs down on London. But the young RAF pilots at the controls of their Spitfires and Hurricanes proved they were more than a match. Thanks to their heroism and skill, they fought off the German onslaught and saved London and the south east from suffering what could have been a devastating attack that would almost certainly have changed the tide of the war against us. It was in response to the bravery, tenacity and expertise of the RAF and the mainly young pilots from 15 overseas nations who joined the ranks, that in August 1940 wartime Prime Minister Winston Churchill felt compelled to make his now famous speech to the commons in which he said “Never in the field of human conflict was so much owed by so many to so few.” 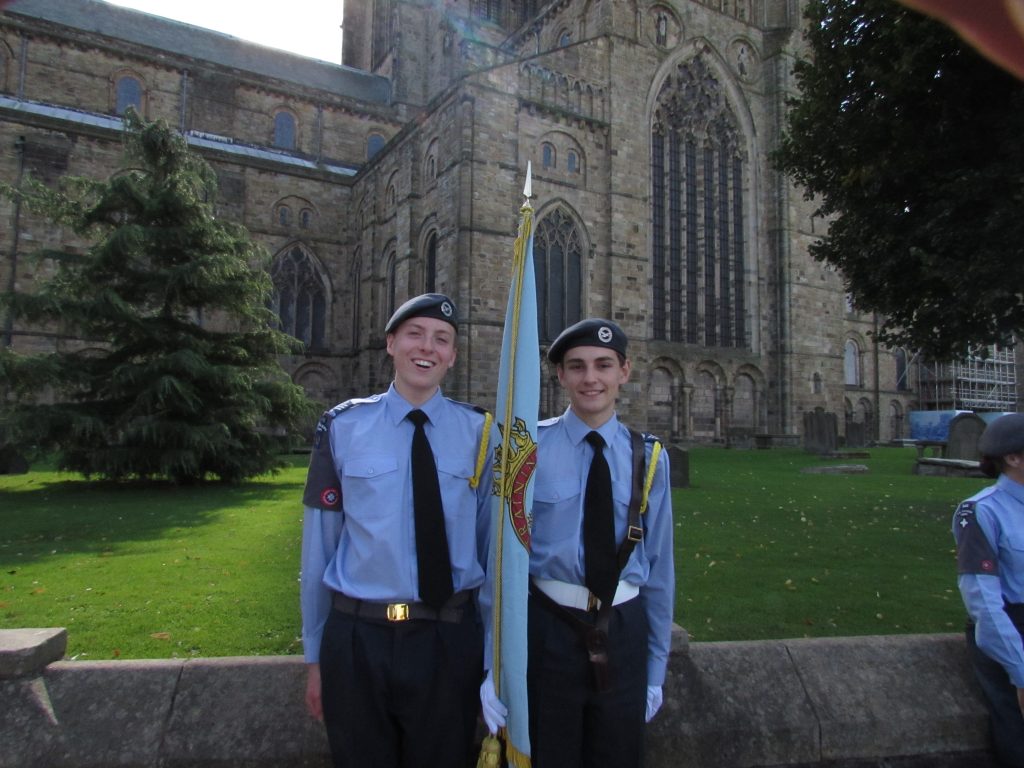 Among those parading yesterday was FS John David Adams, 17, from 346 (Tynemouth) Squadron ATC. It was the fifth Battle of Britain commemoration the Whitley Bay High School pupil had attended at Durham. He said: “My grandfather joined the RAF in 1940, and while he didn’t fight in the Battle of Britain, he served in North Africa during the Desert Rats campaign, and later in Italy. He didn’t talk much about his wartime service. I think he always felt he was just doing his duty. But he lost many close friends, and often spoke to me about what it had been like to live through the Battle of Britain, and the mixture of personal terror and national pride in the RAF that people felt. He left me his medals when he died, and it is because of him I first joined the Air Training Corps and that I now want to go into the RAF myself. The Battle of Britain was probably the most important battle the RAF fought in World War Two, and I always feel very honoured to take part in this commemoration parade.”

Squadron Leader Chris Miller, Training Officer for Durham/Northumberland Wing and one of the parade organisers, added: “Without the positive outcome of the Battle of Britain, the history of World War Two could have been very different. Some of the RAF pilots who fought were as young as 18 – the age today of our oldest air cadets. The average age of those killed was just 21. It is almost beyond our comprehension today that such young pilots were being sent into battle and that the hopes of the nation were resting on such inexperienced shoulders. Every air cadet knows about the Battle of Britain and the commemoration parade is an important day for them. It is only right that we remember what these young men did for our country. They helped give us our freedom. It is wonderful to be able to bring veterans and young air cadets together like this, and to see the pride the Battle of Britain even now instils in people of all ages. It is a real life David and Goliath story from which we can still learn so much.”

The commemoration service was attended by among others Sue Snowdon, the Lord-Lieutenant of County Durham, who afterwards took the salute at the march past on Palace Green.

This year also marks the 75th anniversary of the Air Training Corps. It was set up on February 5, 1941, initially to train young RAF pilots for the war, and is now one of the UK’s largest national voluntary youth organisations for 12-18 year olds. The Air Training Corps has around 40,000 cadets who enjoy a range of exciting activities from flying and gliding to adventure training, sport, overseas visits, annual camps, and shooting. In July this year, 900 from across the North marched through Durham to celebrate the 75th milestone.

Anyone interested in becoming a cadet or a volunteer civilian instructor, can find out more at www.dnwaircadets.org , or www.raf.mod.uk/aircadets/