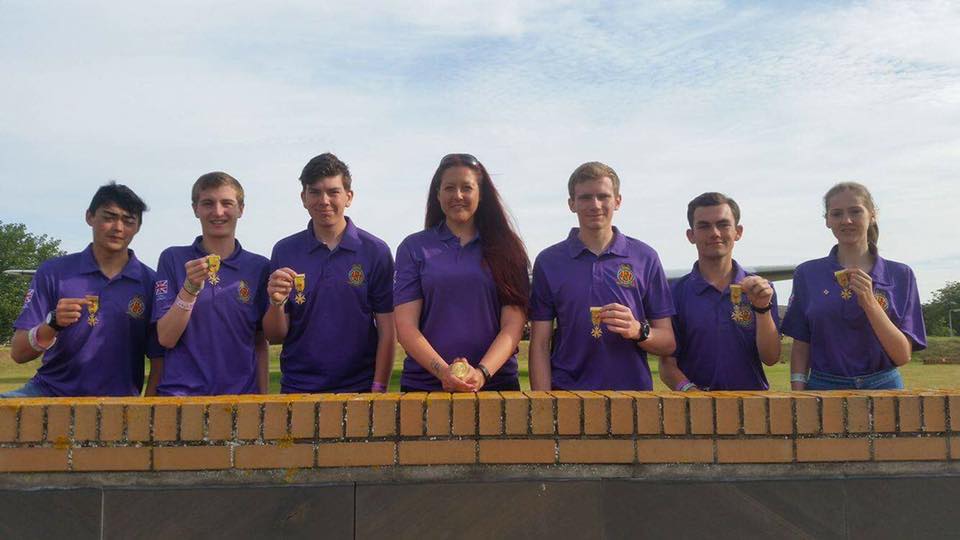 A team of six Cadets and one Instructor from Durham/Northumberland Wing Air Cadets have overcome a series of challenges to complete the prestigious Nijmegen Marches in Holland.

The journey started over 16 months ago, when DNW set themselves the challenge of recruiting and training the first Nijmegen Marching team for over 30 years. A training regime was set up, and Cadets from across the Wing volunteered to take up the challenge. As the weeks and months went on, it became clear who the front runners were and a team started to gel. Fitness was increasing, that famous team spirit was rife and a team of ten was eventually selected for a qualifying march at RAF Cosford. Despite their best efforts, the team were only able to complete one day of the march, and so an alternative qualifying march had to be found; the rigours of Nijmegen are such that only those who can prove their ability to complete one of these challenging preparatory marches is allowed to take part.

Following some additional training and a few team adjustments, 7 cadets and Civilian Instructor (CI) Sara Allison travelled to RAF Wyton to take part in an additional preparatory weekend. After two hard days of marching, 50 miles were completed. The cadets were finally rewarded with the status they deserved: the Wing’s first qualifying Nijmegen team in many years.

On Saturday 16th July 2016, a team of six cadets and CI Allison left the UK destined for Nijmegen, Netherlands in order to take part in the 100th Vierdaagse March. Due to the team’s low numbers they joined up with another small team from North East Scotland Wing to make a complete marching team.

Before starting the March, the Cadets visited a local Air Museum and attended the Military Memorial at Arnhem to pay respect to the fallen soldiers, where a number of graves of soldiers from Northumberland were located.

For the first couple of days at Heumensoord camp, a tented facility just south of the town of Nijmegen and home to the military participants, the teams had time to settle in, visit local sites, make final preparations for the walking days and attempt to acclimatise to the local conditions. After taping feet and making final uniform and kit preparations, they were in bed by 21:30hrs on Monday ready for the pre-sunrise start. March days can commence as early as 01:45hrs to avoid the worst of the daytime heat.

The weather was uncomfortably warm for the week, staying in the high 20s throughout and reaching into the high 30s on the first couple of days. This made the activity even more challenging for the marchers than usual.

At around 16:00hrs local time on Friday 22nd July, after blood, blisters, sweat and tears, the team crossed the finish line on the Via Gladioli in Nijmegen and officially completed the 100th Nijmegen 4-Day Marches. Every marcher in the team who had stepped away from Heumensoord camp early on Tuesday morning had completed all four days or marching and covered the 166.5Km of the march route, which was a fantastic achievement in the conditions, and which truly earned them their road-marching medals. Of 800 British Military Contingent marchers, including regular personnel and experienced marchers, over 150 dropped out during the 4 days, which is testament to the DNW contingent who as first timers, gritted their teeth and completed the route against all odds.

On returning to the UK, the team were presented with their Nijmegen badges. These are the only 6 of their kind in Durham/Northumberland Wing and they will be worn with great pride.

The marching team were:
Team Leader: